When I first inflicted myself on the small town that is the subject of my book*, one of the locals told me that the old-timers gather in the morning at the back of the General Store every morning for coffee. It's kind of a dry town's version of happy hour at dawn. After a couple months of skulking around town I got up the courage to set the alarm for 4:45 am and take my chances with the cowboys. Women aren't allowed at coffee per se, and the youngest of the group is probably in his 60s. It was great luck the men came to accept me back there in their den, and many of them I've come to think of as the dearest of hearts. We talk about everything at coffee, from the weather to the War.

There's only one Democrat—go Bud!—in the bunch (except for me, who they all have written off as a helpless pinko), so conversations around politics and culture can sometimes get testy. One of the men is so unapologetically racist that he says he cannot eat Mexican food. (After a campaign season where everyone talked so dopily about how color blind they were, there was something refreshing about a man so bluntly admitting to his prejudice.) When I told the men my father had been with an amazing black woman for the last 19 years, one of them looked at me aghast and said 'But you wasn't raised by her right?' Alas, conversations about the election were always front-loaded with the ugliest of language. I'd go so far as to say that I love each of the coffee drinkers, because of and despite themselves, and that they'd walk through fire to save me if I were ever in trouble. But the subject of Barack always seemed to get the best of us.

Backing up a bit, I think all those men wondered why I didn't already have a couple of kids, or "tricycle motors" as my dear Ralph calls them. These aren't men who initiate intimate conversations—though I'd say over half of them cried to me in private about various griefs in their lives—and so would never dare ask me why I wasn't pregnant. When I moved to Austin from New York they teased a little that I'd soon be starting a family now that I'd stepped out of the rat race. (Dagger, dagger.) And when I got so angry one morning, clutching my throat to push down a sob after one good, decent man cried "I'm not going to vote for some nigger!" and then another casually replied "Does a nigger stink?" when asked if he was off to the post office, I finally had to say there was a reason I was having such a violent reaction to the conversation this particular morning. "You're pregnant!" cried one happily. Ha! I leaned over to my friend who won't eat Mexican food and said 1) I'm so sorry but I'm going to have to start crying now and you all will just have to bear it and 2) Please do your best not to disappoint me.

And so, at 6 in the morning, in a town of 300, out tumbled the story of Mama and Papa Dog's sad diagnosis, and the lifeboat that was adoption. As I blew my nose and tried to collect myself the men stared hard at the floor grunting "Well damn, damn." Those boys should have turned me away that first morning and sent me toddling off to the beauty shop if I was looking for conversation. Would that I stopped at the subject of infertility! That is not the headline of this story I said, willing that no grocery shoppers come lumbering down the aisle looking loudly for their daily jug of tea until I was out with all of it.

I told them that after much careful and considered thought, my husband and I were adopting a child from Ethiopia. And what killed me was that I'd been able to listen to them talk ugly about black people seeing as I was an interloper in their town, a writer with a tape recorder and a notepad who was lucky to be granted access to their private ritual. But we had gone on the waitlist just the day before to bring home a baby girl. She will soon exist in my world, and I'll be damned if anyone in my presence ever dares to devalue her. So my whole lens of objectivity would soon be shattered, and I'd no longer be able to excuse their language or opinions as detritus from their small town Texas generation. I'm going to become that girl's mother and they'll say something stupid and that will be it. I won't want to be their friends anymore and what a loss that will be. My friend who has lived 67 years without ever eating a burrito couldn't resist getting in a grumble about international adoption and what about the kids here in America and I swiveled to face him and shut him down so fast. There was only one thing I wanted to hear him say about my news and that was Congratulations. And so he said Congratulations.

I'd already made the morning too much about me and there was a trickle of shoppers coming into the store by this point. I didn't want to make a further spectacle of myself so we rather awkwardly and gratefully changed the subject and gabbed for another hour or so. When I got up to leave, No Burritos motioned for me to sit back down next to him on the bench. "You know that thing you were talking about, back there, when you were talking." Uh, yes. "I just want to say 'You go with your heart, girl. Do what's best for you and your family. You just follow your heart. Who gives a damn what anybody else has to say on the matter? '" Even you?, I teased. "Hell, especially me!" Well, now that made me start crying again. Would that this wasn't a world where that would be enough. But it is, for now at least. And my friend, who I hope will still want to be friends with me after the book comes out, has given me the permission to tell him to go fuck himself. 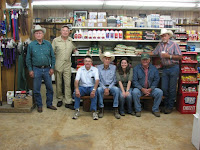 Good men, all of them.

*Shoulda been working on book instead of writing this windy blog.
Posted by Mama Dog at 2:49 PM

This hit the right spot, as I am sure it will with others.

Great storytelling, and I foresee the phrase "No Burritos" making it's way into my daily vocab.

Wow. First - how cute are you sitting smiling amongst those men? I love it. And, again, wow - great post.

YOU ARE AN AMAZING WRITER!!!

I love this post, and I LOVE the picture that is joining it.

I have thought about this post time and time again since I first read it last week. So well written, insightful and thought-provoking.

wow. I hope you are writing this down...

I found your blog via the "FBI" list and am glad I did. My husband and I are also expecting to bring a little girl home sometime soon from Ethiopia. We live in a slightly bigger community then you have described. We live in Gun Barrel City, Texas. We came here from San Diego, CA as my husband accepted employment at our company's Texas plant. My father was a black man and my mother a German national. They got married at a time when it was actually against the law in some states for them to be married. Needless to say coming from San Diego to Gun Barrel City, (my husband is white) I had some trepidation's but so far they have been unfounded and I hope it stays that way. Looking forward to your next update.

hey...just found your blog via FBI and had to comment. We live in Los Angeles now but I grew up in a small town in Georgia and trust me, I know those same coffee drinkers (might even be related to some of them). I've heard horrible things said in the same tone as "pass the salt." And I know these are kind, big hearted people..and yet, they make me feel sick too. It's a hard place.

I'm glad I found your blog...I think we have a lot in common. Can't wait for the book so get writing!

wow, i'm blown away by your writing. part of me hates these bigoted men, and the other part of me understands their ignorance...but to be a mother of a black child and have to deal with this, wow. that will be tough. you will no doubt open their eyes but instinct will be to protect your child.

i hope your child hurries home to you.

I want you to get back to writing your book. I will buy it. I love your response...to the 67 year old who won't eat a burrito about the only thing you want to hear... I could have used a good dose of that this morning :) If I need it tomorrow, I may borrow that line.