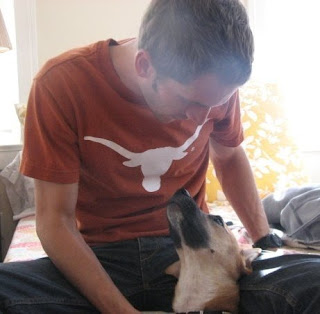 This guy moved with me to Texas so that I could write a dratted book. He finally told me after a few dreary months of living here that if I didn't actually start working on said book, if we were only living in a new, strange city so that I could wring my hands and fret nauseatingly about my inability to work, that he would have a hard time forgiving me. (Hi-Yoh! That cured the writer's block!)

This guy: Who would do anything for me or our animals. Who is inexplicably wearing a Longhorns t-shirt in this picture as the pup gazes adoringly up at him. Who is going to add a tattoo of Ethiopia to his arm. Who came home from the library last week with a graphic novel, a science fiction novel, a history of the Gaza Strip conflict, and I'm Chocolate, You're Vanilla. While I try to stay numbed up and disconnected from adoption anxiety, this guy's dreams are swimming with images of the baby muffin. In one, everyone in an elevator turned away from a horrifyingly disfigured little girl except him. He reached towards her, and she to him. In another, he was pushing his daughter around in a doll stroller before deciding that he should carry her in one arm and the stroller in the other. Last night he dreamt that I was killed in a rocket explosion (still here Papa Dog!) and that he was overcome with sobs, not just because he lost his wife but also the child our agency would no longer trust in his care as a single father.

Stay strong and sensitive husband! I think she is coming and that we can do this. In the meantime, thank you for always making me dinner.
Posted by Mama Dog at 6:51 AM

I think I am in love. Cute too.

Wow, what a tribute.

Hi there. This is my first time to your blog. And I must say, the combination of Patti, Emmylou, and Beyonce on your profile really resonates with me. :)

Um,and also, last year I read The History of Love and loved it.

We should meet sometime!!! I'm in dallas.

Sweet write-up for your beloved. I especially like the dinner bit. You. Are. Lovely.

Oh so sweet. He is going to be a great dad, huh?

Mama Dog- get off your arse and write some more posts. I really, really dig what you have to say.

Also- thanks for your sweet words to me the past few days. I have been touched and am humbled by your generous thoughts of me.

"Mama Dog- get off your arse and write some more posts. I really, really dig what you have to say."
I was coming here to say the same thing only to find a lovely post that I somehow missed. He sounds like a keeper.

I don't know about my neighbors (although I have my suspicions), but I was totally transfixed this morning. I suspect you were too...