Yesterday I took my girl to the hair salon. It was our first trip together, and the man who ran the shop came recommended by another local adoptive mom. Ava is fairly tender-headed—though she's developed some real endurance over the last two years—and I wasn't sure how she'd hold up with a stranger taking hold of her tresses. So I really talked up our visit to Mr. Greg and how fun it was going to be and what a big girl she was and that I would pack not one but two lollipops in my shorts pocket.

Neither of us really knew what to expect. I think Ava imagined a delightful afternoon of lollipops and simply another person in her life cooing over her beauty. I assumed I'd act a little awkward and high-pitched while trying to gracefully turn down any and all suggestions of relaxing treatments. An hour would pass; we'd emerge back into the sunlight with Ava's hair perhaps done in a far better set of box braids than I could've managed in three times the amount of time. Hooray! Rite of passage, check.

Mr. Greg was awfully nice, a big booming type of a guy prone to loud claps. I liked him immediately. He got Ava up on a cushioned plank placed on the arms of a stylist chair and started feeling her hair. Her scalp looked great, he determined. Her hair was terrifically healthy. Well wasn't I feeling like the cock of the walk. Then he pronounced that her coil pattern is simply too tight to justify the length of her hair. Her hair would always be prone to matting and tangling and eventual dreading and we really should cut it. Cut it? But her magnificent puffs!

Cut it. It wasn't fair to me or to her, Mr. Greg said, not to choose a hairstyle that worked with her hair. She was not meant to have long hair. But, I stammered, you said her hair was healthy and my understanding is that in his (our?) culture black girls with short hair are frowned upon and wasn't this what I signed up for when I became Ava's mother? Her hair might be high maintenance but that was part of the deal. It was my job to spend time each morning detangling and conditioning. It's my job to spend a few hours on Sunday attempting a new style that will hold nicely for a few days. He told me to get a new job.

At this point I was really flummoxed and I could tell Mr. Greg was starting to tire of my hand-wringing. I hate it when people think I'm nuts. (And yet it happens so often!) He had me look at a bunch of pictures of black women with short hair (and I mean to the scalp short). Did I not think they were beautiful? Well of course I do, I said, but they're grown women who've made a style choice for themselves, not because their nervous white mama made them go short, and they've also chosen to pair their look with makeup and big jewelry. Well pierce her ears, said Mr. Greg. Pierced ears would cut down on people calling her a boy or teasing her or questioning her sexuality. At this point in the afternoon I may have been quivering as I watched Mr. Greg put two little marker dots on Ava's ears and take out his hydrogen peroxide and piercing kit. I stupidly telegraphed my discomfort by telling Ava that this was going to pinch. Well that really made Greg shake his head in disapproval. So now Greg was growing weary, Ava scared and I'm ashamed to admit that I was on the brink of tears.

"I really think I should talk to Ava's Dad about all this before I do anything," I said. He handed me the phone. I left poor Tim a message and sent him a text, hoping that he'd get a break on set in time to see my SOS. Just as Mr. Greg was about to shoot the gun into Ava's ear/my heart I managed to catch my breath and call cut.

Mr. Greg allowed himself a little groan of exasperation. It's just that I expected my job that day to be advocating for kind treatment of her beautiful, natural hair, I tried to explain. But somehow I found myself arguing the other position, while this black man was encouraging me to broaden my concept of beauty, culture be damned. Poor Mr. Greg, trying to do the right thing. I'm so grateful to him for disavowing relaxers and banning them from his salon. I'm so impressed by his determination to run a shop whose mission is to reteach a culture how to love and respect their natural beauty. He was tired of black women thinking of their hair as the enemy. When he stopped relaxing hair at his salon he said most of his clients were not just mad, they came to think of him as the AntiChrist. Now he specializes in Sisterlocks. Yes to all of this!

And yet what to do with my three year old girl? Girls have long hair. Black girls especially, or so was my impression. Shouldn't Ava have braids or twists or rows, no matter the cost or, I don't mean this, do I?, the demands put on her patience and pain threshold. And if I'm being brutally honest with myself, is my hesitation really just because I think A) she won't look as pretty with short hair and I get an inordinate amount of pleasure at the number of people who remark on her adorableness and B) black women will look disapprovingly at me for cutting her hair. Hmm, A and B aren't really about Ava at all, are they? I'm such a dick.

I paid my $25 consultation fee and promised Mr. Greg we'd be in touch again. I'm at such a loss of what to do.

Tim was so happy he didn't come home to his little girl with gold posts in her ears. 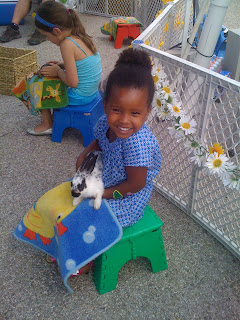 First trip to the emergency room

Last night Tim and Ava took Tulip for a walk after dinner. I decided to stay back at home so I could stumble around the internet in peace. One friend's status update bemoaned her child's vomiting; another her boy's broken arm. And literally just as I was thinking how we'd been spared any real scares I heard a siren-like wail crash up into the house. Tim was yelling for me, saying that Ava had taken a header on the street and that it was very bad. My body went dark and I shut my eyes very tight. No, no, no. But there she was in Tim's arms, sobbing for me, a golf ball sized lump already shiny on her forehead. "I want to go to the doctor," I remember groaning, my voice like a cat about to fight. "I want to go to the doctor, I want to go to the doctor."

Tim grabbed a pack of frozen peas, I put a popsicle in Ava's little hand ("open it for her," Tim had to remind me). The emergency room is just a two minute drive and during that time Ava became rather pleased with her popsicle and intrigued about our adventure. There was no line in the waiting room and we were sitting on a hospital bed within five minutes of arrival.* The nurses were lovely; the doctor a reassuring mix of stoic and good-humored as he checked for neurological damage and gave her a full body scan. Ava, magnificent child, was alert and focussed and curious. Doc pronounced her in good shape, though warned her lump would appear worse over the next 48 hours and her dinged up eye would most likely look like that of a fighter's in the morning. As we left she spelled out the bright red letters of EMERGENCY which made my eyes sting.

She slept in our bed so we could rouse her every 2-4 hours. I, a terrible sleeper on good nights, didn't sleep at all.

Somebody shoot me up nice with a horse tranquilizer because my heart just can't bear it. 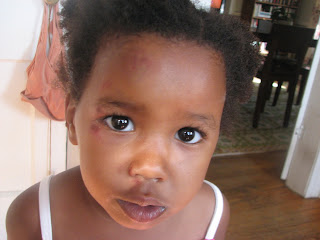 The Morning After. (Lump is happily all but gone!) 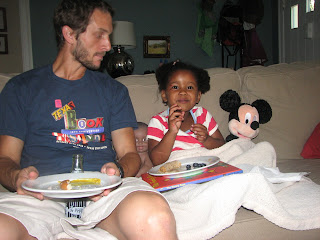 A Day of Leisure and Rest.

*Only once did I seriously come close to losing it--when the lock-jawed, idiot-face receptionist who typed with one finger wouldn't tell my child her name. "What's your name?" Ava asked her. "What's yours?" she said. "Ava, what's yours?" my baby whispered. "What's yours?" the woman said a few more times. Lady, tell her your god damned name or this clipboard goes down your throat.
Posted by Mama Dog at 6:48 PM 4 comments: