Last night we went to our first meeting of the Brown Babies, Pink Parents support group. Papa Dog found the group online, on one of his many marathon surfs through adoption-related issues blogs. We've been slow at building a local adoption community for ourselves down here. But this network sounded promising: Founded by a lesbian couple with three black daughters, focussed on matters emotional, practical, and political. They meet once a month at a black church in East Austin (a world away from our white ass hood) and score!, pot luck.

When we first arrived Ava was uncharacteristically shy for roughly 10 seconds, an eternity for her social self. Somehow it ended up that she and I were separated by a little girl during dinner and something about Ava's sweet still-baby chin hovering parallel with the table, whispering "apple" to herself before eating a grape, made me want to cry. After dinner she scooted down over to me and propped her elbows on my leg for a bit before I asked if she wanted to run around with the older boys. See ya! The kids chased each other in circles for about 15 minutes, Ava laughing the loudest and helicoptering her little arms as she tried to keep up. Something about seeing my child play with a roomful of other black children made me want to cry. The kids were then gracefully ushered off to the nursery, Ava looking only moderately confused, and the adults got to talking.

As the Pops and I were the only new folks, everyone first introduced themselves and gave a brief skeleton of their family origins. We were the only international adoptive family in the house; everyone else had worked within the domestic foster care system. My God, the stories. When a woman from one lesbian couple said 'Well, we have 11,' I figured she meant they had an 11-year-old. No, see, they have eleven children. As in 10 +1. ELEVEN children from the foster care system, many of whom were brought home in their early teens after languishing in the system for the bulk of their lives. It struck me that some people with kids are useless. Some people are parents. Some, advocates. And some are warriors. These women were warriors. Arkansas, my ass.

At one point in the evening the term "color blind" came up. This same lesbian couple was talking about their youngest kids' very earnestly hippie school, run by people who are so progressive that the subject of race deeply unsettles them. "They fancy themselves color blind," one of the mothers said. The founder of the group leaned over to me explaining she didn't know where I stood on the term but their group didn't have much use for it. And that went double for "All you need is love." Oh hallelujah. When we introduced ourselves, everyone listened. They didn't try to reinterpret our situation, or lolly lolly, happy happy our family. They just listened. The founder asked me what we'd found the most challenging since coming home. The truth is that what's been hardest are just the daily rigors of parenting. (That and nine months of the squirts.) The hardcore emotional stuff is still just ahead. But yes we've been in too many classrooms and playdates and pool parties where Ava is the only person of color. That's exhausting. And that's when I got my real welcome to a support group. This woman had an in with one of the best preschools in town that happens to be in East Austin and happens to have a majority black population with majority black teachers. This one worked in the school system for years and she wanted to make sure we knew about this program with these initials. Then someone else threw some initials at me. Then more initials. We were initialiated! Then someone handed me a 15% off coupon for curly hair care products. Then someone said there was pie and something about the promise of coconut custard always makes me want to cry.

The conversation moved on to the coming school year and what lessons the parents of older kids might impart to the parents of younger kids about how to help their children prepare for questions about their adoption and their skin and the fact that their mama is a honky. Then we all had a good laugh at a well-meaning person's expense. ("I'm looking for my brown kids," the woman said she announced at a party. Her friend looked at her and frowned and motioned her head to her own kids. "I don't like to use those kind of words around my kids," she told the woman. "The word 'brown?'" Everyone laughed.) Brown Babies, Pink Parents*—folks with a sense of urgency and humor. Where have you been all my life?

After an hour of visiting it was time to scoop up the kids. When I saw Ava she jumped laughing into my arms. Then I think she was so overwhelmed with emotion at seeing Papa and I that she burst into hot tears for about a minute and held on constrictor-like to my neck. When I asked if she wanted to say goodbye to all of her new friends she got down and did her pony run in figure 8s with all the other kids. On the drive home she kept saying "Mommy. Daddy. Hi!" with a tone of almost rapturous relief in her voice. We came back Ava.

Tomorrow is a week of mornings at gymnastics camp. She did a week there early in the summer. The mere mention of the word trampoline makes her quivery with joy. She loves it. She loves the counselors. She loves the kids. She will most likely be the only black child in the gym, besides an old poster of Dominique Dawes hanging on the wall.

Ava is two years and one month old. Often I'll look down at her right hand and she'll have her fingers crossed. It's just a quirk but sometimes I like to imagine it a gesture of her innate sense of optimism and hope. Whenever we catch her with her fingers crossed one of us will cross our fingers too and we'll give her what's become our family's lucky fingers version of dap. 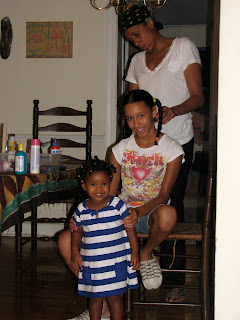 Ava with her Grandma and Taylor

*Group founder Amy Ford has written a book called Brown Babies, Pink Parents that is going on sale next week. She's divine. And tough and practical too.
http://www.brownbabiespinkparents.com/
Posted by Mama Dog at 10:31 AM 8 comments: