I consider it dumb luck that we never really dealt with the more intense attachment issues we were told to expect as adoptive parents. I do remember some very awkward mornings early on at a music class when mothers would sit in a circle with their babies on their laps. Ava would watch the children closely, as if studying their ways, and take cues from them. Sometimes that meant she would sit on this old gal's lap, but usually she trusted her peers' judgment and would elbow her way into some other already chosen mother's lap. That stung a little as I sat there alone badly singing "Hell-ooo everybody, so glad to see you!"—but as long as it didn't provoke a territorial fit in another child and the mother seemed suitably enamored of her unexpected load who was I to demand my baby on my lap. After a couple of months she stopped going to other women and we became her people and never has there been a more loving, affectionate, expressive 4-year-old child.

To everyone that is except her dolls and stuffed animals. When Ava would get into her crib at night she would look aggressively at her "friends" and start picking them off one by one. "Get outta here!" she'd say like a bouncer in a dock bar as she sent each sailing across the room. "I'm tryin' to sleep." Tough love! We encouraged her to name them—"Truck?" she offered once for a little stuffed elephant in a very bored voice—and to give them a pretend life but nothing took. In May we went to my best friend's wedding in Los Angeles and stayed at a very fancy hotel. Upon check-in the concierge gifted Ava with a stuffed koala bear and she surprised us by naming it ("koala") and every couple of weeks or so would hold it fondly for a few seconds.

A couple of weeks ago Tim and Ava were getting ready to visit his folks in Florida. Before they left Ava bundled up a little fleece blanket and told me that it was her baby. Wasn't I excited to be a Grandma! 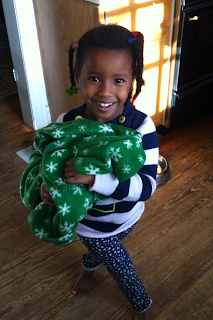 The baby's name was Charlie Ava told me, which is also her class hamster's name. Charlie too was adopted from Ethiopia when she was 11 months old. She misses her uncle very much but the baby loves Mum Mums and she likes to be sung lullabies as she falls asleep and she needs a bottle and would I promise to feed her and sing to her and change her diaper and tell her how loved she was while Ava was away. I solemnly promised to do all this and weirdly did find myself poking my head into Ava's room each night to make sure the blanket was still happily stuffed on top of her dresser like she had left it. I flirted with the idea of putting a diaper on it as a gag for Ava when she got home but then remembered I was 38. 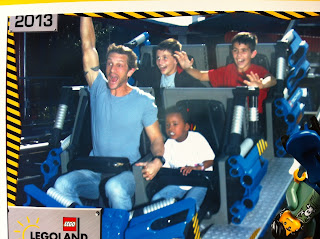 Here's what a Daddy-Daughter trip looks like by the way. Hold on to your face Ava.

On their way home Tim called from the airport to say that Ava sobbed for her beloved Grandma all through security. When he put her on the phone she was in a state of grand distress. She was excited to come home to see me she wailed, but she also wanted to stay with her Grandma, and now she didn't know what to doooooooooooooooooooooooooooooo!

When they got home later that night Ava unpacked all of her new treasures from her Grandmother. A princess book, number and word flash cards, a new stuffed animal I pictured ripped to shreds by the puppy within days. Her Grandma had won her a pink walrus from Legoland and Ava told me her name was Lila and and that she loved her loved her loved her. That night Ava surprised me by tucking Lila into bed next to her and telling Lila to be quiet during the book in a firm but loving voice. 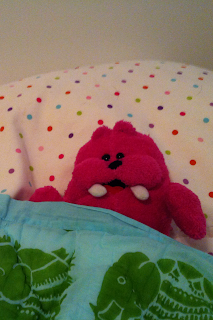 The next morning Ava remembered Charlie and told me that I had done well by the blanket. Then she proceeded to tuck Lila in for a nap in the sun. Lucky Lila, Lucky Charlie. 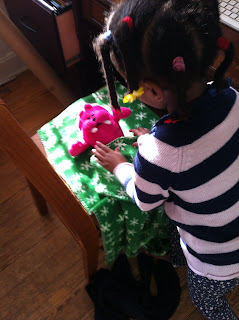 Our little girl—no longer a sociopath to the stuffed community.
Posted by Mama Dog at 10:02 AM

That is so sweet. :) Eva, at 10, sleeps with a stuffed sheep and enjoys doing her dolls' hair, but she doesn't have any imaginative side to her i.e. making them talk, talking to them, etc. I tried to get her to interact with them, and she just looked at me like mommy is crazy. :) I said, "Hi, Tiana, I'm Belle! Want to play?!" Haha, sometimes I have to remember that she's used to sweeping her dirt floor with sticks and collecting pretty rocks for fun, so it's a little different now in America! Although, she still thinks cleaning is fun. :)

Ava seems like such a confident, self-assured, and happy child- you've raised her so well. I love the picture of her and daddy. :)